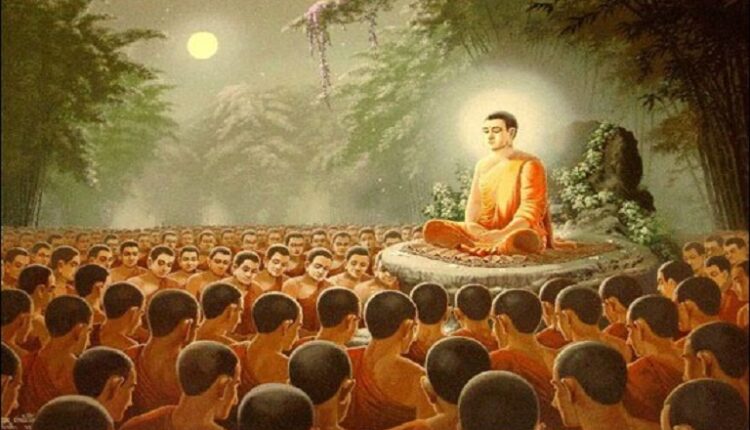 There is this Noble Truth of Suffering: such was the vision, insight, wisdom, knowing and light that arose in me about things not heard before.

This Noble Truth must be penetrated by fully understanding suffering: such was the vision, insight, wisdom, knowing and light that arose in me about things not heard before.

This Noble Truth has been penetrated by fully understanding suffering: such was the vision, insight, wisdom, knowing and light that arose in me about things not heard before.

The First Noble Truth with its three aspects is: “There is suffering, dukkha. Dukkha should be understood. Dukkha has been understood.”

This is a very skilful teaching because it is expressed in a simple formula which is easy to remember, and it also applies to everything that you can possibly experience or do or think concerning the past, the present or the future.

Suffering or dukkha is the common bond we all share. Everybody everywhere suffers. Human beings suffered in the past, in ancient India; they suffer in modern Britain; and in the future, human beings will also suffer. What do we have in common with Queen Elizabeth? – we suffer. With a tramp in Charing Cross, what do we have in common? – suffering. It includes all levels from the most privileged human beings to the most desperate and underprivileged ones, and all ranges in between. Everybody everywhere suffers. It is a bond we have with each other, something we all understand.

When we talk about our human suffering, it brings out our compassionate tendencies. But when we talk about our opinions, about what I think and what you think about politics and religion, then we can get into wars. I remember seeing a film in London about ten years ago. It tried to portray Russian people as human beings by showing Russian women with babies and Russian men taking their children out for picnics. At the time, this presentation of the Russian people was unusual because most of the propaganda of the West made them out to be titanic monsters or cold-hearted, reptilian people – and so you never thought of them as human beings. If you want to kill people, you have to make them out to be that way; you cannot very well kill somebody if you realise they suffer the way you do. You have to think that they are cold-hearted, immoral, worthless and bad, and that it is better to get rid of them. You have to think that they are evil and that it is good to get rid of evil. With this attitude, you might feel justified in bombing and machine-gunning them. If you keep in mind our common bond of suffering, that makes you quite incapable of doing those things.

The Pali word, dukkha, means “incapable of satisfying” or “not able to bear or withstand anything”: always changing, incapable of truly fulfilling us or making us happy. The sensual world is like that, a vibration in nature. It would, in fact, be terrible if we did find satisfaction in the sensory world because then we wouldn’t search beyond it; we’d just be bound to it. However, as we awaken to this dukkha, we begin to find the way out so that we are no longer constantly trapped in sensory consciousness.

WE ARE IN NEED OF A PEOPLE FRIENDLY GOVERNANCE