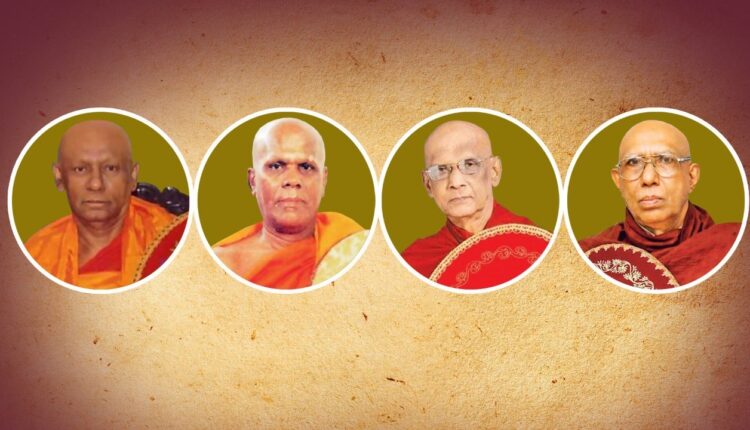 Vesak Poya Day , popularly known as Buddha Purnima in India, the land of birth of the Buddha, was celebrated last Monday , May 16, in a grand and tranquil manner in three sacred shrines connected with the birth, life and teachings of the Buddha – Lumbini, Bodh Gaya and New Delhi – under the auspices of the International Buddhist Confederation (IBC) and in coordination with the Ministry of Culture of the Indian Union Government and participation by prominent Indian leaders , especially Prime Minister Narendra Modi. The celebrations in Lumbini, Nepal, the birth place of the Buddha, were attended by Indian Prime Minister Narendra Modi as the chief guest. PM Narendra Modi paid an official visit to Lumbini on May 16, 2022, coinciding with the auspicious occasion of Buddha Purnima, at the invitation of the Prime Minister of Nepal Rt Hon’ble Sher Bahadur Deuba.

At the event, PM Modi addressed a large gathering of monks, officials, dignitaries and those associated with the Buddhist world. The historically significant celebrations generally evolved around the life, birth, enlightenment and teachings of the Buddha , speeches were on the state of the world today and the need for the world to practice the eight fold path preached by the Buddha to achieve peace , harmony and happiness.

Prime Minister Modi together with Prime Minister Deuba participated in the “Shilanyas” ceremony for the construction of the India International Centre for Buddhist Culture and Heritage at a plot in Lumbini belonging to the International Buddhist Confederation (IBC) based in New Delhi. The plot was allocated to the IBC by the Lumbini Development Trust in November 2021. After the “Shilanyas” ceremony, the Prime Ministers also unveiled a model of the Buddhist center, which is envisaged as a Net-Zero compliant world-class facility that would house prayer halls, meditation center, library, exhibition hall, cafeteria and other amenities and would be open to Buddhist pilgrims and tourists from around the world.

While the New Delhi celebrations were also on a grand and tranquil note, participated as Chief Guest by Indian President His Excellency Ram Nath Govind, the Bodh Gaya celebrations were on a low key with chanting of prayers. The celebrations, a historically significant event in the Buddhist calendar, received wide coverage in news bulletins of the popular international TV and radio channels and the events were also broadcast live TV and radio channels and in all social media.

Chief prelates of the four Nikayas – Supreme Patriarch of Sri Lanka Sri Amarapura Maha Nikaya Most Venerable Agga Maha Panditha Dr. Dodampahala Chandrasiri Maha Thero, the Deputy Chief Prelate of the Malwatte chapter of the Siyam Maha Nikaya Most Venerable Dimbulkubure Wimaladharma Maha Thero, Deputy Chief Prelate Most Venerable Venduruwe Upali Anunayake Thero of the Asgiriya Chapter and Most Venerable Agga Maha Panditha Makulewe Wimala Mahanayake Thero of Sri Ramanna Maha Nikaya in their messages conveyed their blessings for peace and harmony and mutual love in the entire world at this present time of chaos, turbulence and hostility. They expressed gratitude on behalf of the Maha Sangha to Prime Minister Narendra Modi, the Government of India, the Secretary General of the IBC Venerable Dr Dhammapiya Thero and the Deputy Secretary General of the IBC Dr. Damenda Porage of Sri Lanka for hosting Buddha Purnima day in the most venerated venues in Buddhist history and on a very sacred and significant day to Buddhists all over the world. They expressed appreciation of the members of the IBC for its continued hosting of the event on an imposing and grand scale every year for the past so many years.
They also specifically expressed their deep-gratitude to the peoples and Government of India for providing their immense and timely humanitarian assistance at Sri Lanka’s worst ever economic crisis and thus giving strength to the Sri Lankans to face the situation. In their messages they remarked that Sri Lankans inherited their religion, culture, traditions and civilization from India and this relationship and brotherhood should grow from strength to strength. Buddhist philosophical concepts are right and most suitable to the entire world at all times and the Maha Sangha was touched immensely over Prime Minister Narendra Modi’s commitment and passion towards promoting Buddhism, they have also stated in their messages.