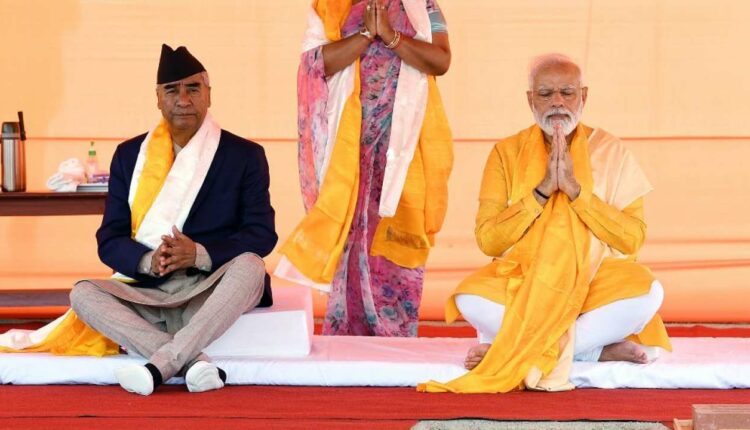 Indian Prime Minister Narendra Modi’s qualities as an excellent human being and a dignified but humble national leader with rare human qualities was witnessed by the august gathering at the Vaishakha Buddha Purnima (Vesak Full Moon Day) celebrations held on May 16, 2022 at Lumbini, the place of birth of the prince Sidhartha. The writer, as Deputy Secretary General of the International Buddhist Confederation (IBC) was fortunate to be there as an organizer of the event on behalf of the IBC, the initiator of the event,  and witnessed how much the gathering, which included Nepalese Prime Minister  Sher Bahadur Deuba,  Buddhist prelates  and senior monks from almost all Buddhist countries of the world,  local political and civil community leaders and people from all parts of India,  Nepal and Sri Lanka, was touched and spellbound. The writer wishes to share his sentiments.

Premier Narendra Modi came at the invitation of the Prime Minister of Nepal Sher Bahadur Deuba and paid an official visit to Lumbini on May 16, 2022 where the Buddha Purnima celebrations were being held under the auspices of the Indian Ministry of Culture and the International Buddhist Confederation (IBC) in collaboration with the relevant Nepalese authorities. PM Modi, together with his Nepalese counterpart Sher Bahadur Deuba laid the foundation stone for the Indian International Centre  for Buddhist Culture and Heritage in the Lumbini Monastic Zone.  The Indian Premier began his Nepal visit with prayers at the sacred Mayadevi temple. After the shilanyaas ceremony, which was performed by monks belonging to two major Buddhist traditions, Pali and Sanskrit, the two Prime Ministers also unveiled a model of the Centre.

What worth highlighting is the serene approach and very composed and devotional attitude of Prime Minister Narendra Modi which was evident from his body language and movements. The entire one hour of chanting the Buddhist prayers, both in Pali and Sanskrit by the high Buddhist monks and priests, he remained seated cross-legged, erect with his hands clasped together in the Buddhist/Hindu worship manner, fully composed and meditative. He just remained in that pose the entire one hour like saints of the past without moving or turning and not showing any signs of discomfort.  For the leader of the Indian sub-continent with so much to focus his thoughts upon this is extremely impossible unless he had reached a high spiritual level of contemplation.

At the conclusion of the chanting, he got up with much ease without anybody’s support unlike others who were seated together with him.

And when the next event on schedule – the distribution of robes to monks – came up he together with Nepalese Prime Minister Sher Bahadur Deuba handed over the robes to each monk seated cross-legged on the floor and bowed down very low to pay his respects to them which again feat unimaginable of   leader of the caliber of the Indian Prime Minister.

Prime Minister Modi has proved himself as an exemplary leader of a multi-cultural and multi religious country loved by all and which is rare occurrence in history. The gathering was spellbound and I believe so will all who viewed the event over the TV and the social media platforms.   Prime Minister Narendra Modi demonstrated his equanimity in all the other events that followed.

The leaders paid their respects at the Marker Stone inside the temple premises, which pinpoints the exact birth spot of the prince. They attended the pooja conducted as per Buddhist rituals.

The two Prime Ministers also lit lamps near the Ashoka Pillar located adjacent to the temple. The pillar, which was erected by emperor Ashoka in 249 BC, bears the first epigraphic evidence of Lumbini being the birthplace of the Prince Siddhartha who later attained the Buddhahood in Bodhgaya.

Thereafter, the two leaders watered the Bodhi tree sapling from Bodh Gaya which was gifted by PM Modi to Lumbini in 2014 and also signed the temple’s visitor’s book.

The Centre will be constructed by the International Buddhist Confederation (IBC), New Delhi, on a plot allocated to IBC by the Lumbini Development Trust (LDT), under an agreement between IBC and LDT signed in March 2022, the Ministry of External Affairs (MEA) said in a statement.

After the shilanyaas ceremony, which was performed by monks belonging to two major Buddhist traditions, Pali and Sanskrit, the two Prime Ministers also unveiled a model of the Centre, he said.

HISTORY HAS TO RECORD INDIA`S HELP IN GOLDEN LETTERS