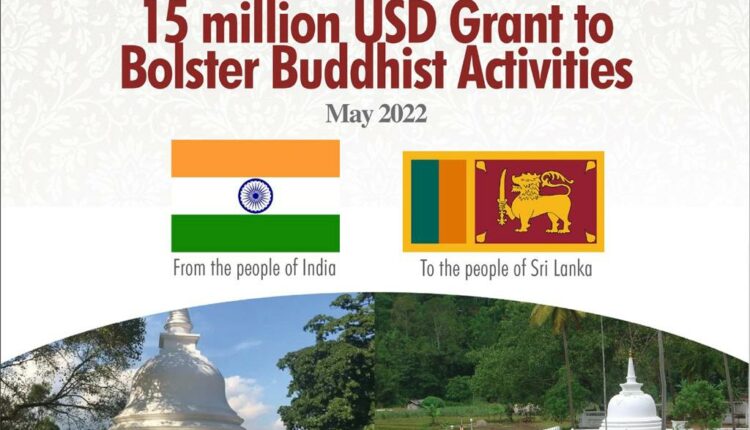 In a Poson Message released to the press, siting the importance of historic and auspicious Poson Festival, Chairman, Foundation for Buddhist Brotherhood, Dr Damenda Porage states that the bond between India and Lanka should last long and it is spiritual, bound by brotherhood and compassion so unbreakable.

We publish the full message below.

When two-and-a-half millennia back, Sri Lanka was a land of diverse communities living in darkness and ignorance harboring superstitious sub-human beliefs, the light of the Buddha’s teachings came from India to guide and lead them in the right spiritual direction. With that came national advancement through culture, music, arts, crfts, architecture which, over the centuries, shaped Sri Lanka into a civilized and highly spiritual society. Sri Lanka became a blessed society, the cradle of Buddhism and over the years religious, historical and cultural ties with India grew from strength to strength. Through the growing spiritual, cultural and economic interactions between the two countries, they traversed the right path with mutual support and goodwill and, in spite of certain transient political issues during the course, retained their close ties and neighborly relations with India always coming immediately for Sri Lanka’s rescue at times of political and economic instability and crises.

Poson is a very important festival celebrated in Sri Lanka on the full moon day in June. Poson Poya (full moon) is noteworthy to Sri Lankan Buddhists as the day on which Indian Emperor Asoka’s son, Arahant Mahinda, introduced Buddhism to the island in the 3rd century B.C. It was indeed a momentous event in the history of Lanka. It marked the strengthening of nation building in the island and built up of lasting brotherhood with India and other countries in the region professing the new teaching of Buddha. After embracing Buddhism, the King of Lanka and the people, soon led to a phenomenal progress of the new philosophy with thousands of Lankans entering the Bhikku and Bhikkuni orders, to teach and spread the noble teachings of the Buddha for the well-being of the many in the Island leading to a novel culture and a more compassionate way of life.

The pioneer, the one who laid the unshakably strong foundation and the pillar for all future religious activities was none other than the great Emperor Dharmashoka of India.

He sent missionaries in all eight directions and to Lanka he sent religious missionaries of Buddhist monks and nuns led by his own son Venerable Arahath Mahinda and daughter Bhikkuni Sangamitta, the latter having brought the sapling of the holy Bodhi Tree from Bodhgaya which is now in Anuradhapua venerated by millions of devotees worldwide.

The pages of history of the two countries bear witness to all these facts.

What began as spiritual gift back then sowed the seeds of brotherly relations which sprouted and grew as a giant tree and today when Sri Lanka is in a historically unprecedented economic downturn India responded immediately by extending a massive Billion-dollar assistance to help supply essential items like fuel, essential medicine and food.

Political and government leaders of independent India, almost all of them, were not lacking in either their interest or contribution towards the noble cause of promoting the religious ties and cultural relations between the two countries. Buddhist religious, cultural and academic activities have continued incessantly over the centuries, together with mutual cultural exchanges.

As Buddhist communities all over the world have observed and appreciated over the years, the Prime Minister of India Shri Narendra Modi has demonstrated his commitment towards promoting Buddhist religious ties and heritage encompassing and uniting the Buddhist world and has proved the ‘pinnacle’ among the Indian political leaders similarly as Emperor Dharmashoka.

We saw yesterday his government sending Kapilavastu holy Buddha Relics from New Delhi to Ulanbataar, Mongolia for veneration of Mongolian Buddhists reminding us the noble deeds of great Indian Emperor Dharmashoka many centuries ago. The whole Buddhist world appreciates this noble gesture by the Government of India.

On this auspicious full moon day, we Sri Lankans, while observing the eight precepts, transfer merit, ‘Anumodana’, to Prime Minister Shri Narendra Modi, his government, and to our sisters and brothers of India and also to all sentient and celestial beings.

Sabbe Satta Bhavantu Sukhitatta!
May all beings be joyful and secure; may they be happy within themselves!