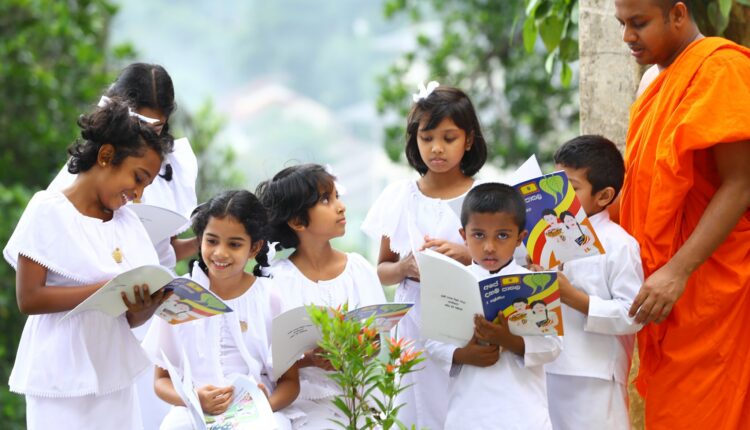 It is readily distinguishable that the children are being segregated from Dhamma schools. This unfortunate trend became the fundamental motivation for writing this article. Apparently every parent’s wish is to bring up an admirable child with high moral standards. They want to see a virtuous person more than a man of wealth. Therefore they admit their children to Dhamma school with totally different expectations. According to the socio-religious context in Sri Lanka the children are customarily being trained to maintain moral standards within the family. But by sending them to the Dhamma school parents expect them to receive more admonitions in their upbringing.

It is unfortunate to witness of students quitting from Dhamma school which are being conducted systematically. Finding the reasons for this attitude may require a research process. Due to the limited space allocated for this article, one single fact would be briefly discussed.

It is mandatory for students to follow the given curriculum in their ordinary school. It would be justifiable to record that the students are being forcibly kept within the curriculum limiting their independence on doing what they are interested in. This has become a fact which is not understood by many parents and even the teachers.

This coercion absolutely demotes individual right and liberties and as well as their creativity. It is unsurprising that school education becomes an unpleasant experience for the students. Therefore a need has risen to have a balanced analytical discussion about the curriculum is unseen, the usual set of text books which were composed years ago can be seen in use still. As long as we don’t see a particular curriculum we don’t see the main common objectives of education in Dhamma schools. The first and foremost is to find out, to which extent this existing system of education is practical and applicable rather than finding a standard curriculum in use.

It is an undeniable fact that it is essential for a Buddhist to have a theoretical knowledge on the subjects such as, Buddhism , history of Buddha Sāsana, and the life of the Buddha. But still we need to reconsider the practicality of spending time to learn pāli and Abhidhamma

Now as an experience teacher and an educationist I understand that being a student of a Dhamma school decades ago I have dawdled by trying to learn Pāli and Abhidhamma as a subject. The problem lies on the expectations of the system for the students to have an in-depth knowledge of these deep and vast subjects. Now I know that I have actually not comprehended those subjects but mechanically followed the instructions.

Apparently ‘Pāli’ is a dead language. It is needed by the people who really wants to learn Pāali as a language and those who do related work. Therefore one can argue that consuming time to learn a dead language is absolutely absurd. This unintelligible teaching-learning methodology has made this education impractical and unrealistic entirely.

It should be firmly recorded that this is not an effort of underestimating ‘Abhidhamma’ and ‘Pāli’ as subjects. But is an undeniable fact the curricula and syllabi needs to be amended and changed parallel to the needs of the changing world. Therefore if the curriculum of Dhamma schools could be modified and revised to make it more practical and realistic we can expect a valid change in the society in the future.

Time has come to make the teaching-learning process live and practical. More time should be allocated for practical usage of what they learn theoretically. To make it a reality, group work and workshops can be organized enabling the students to engage in virtuous activities and motivate them to achieve higher moral standards. These workshops and group work needs to be interesting, attractive and enjoyable.

The second drawback of the system is grading tests and subject related competitions.

These components are abundant in the ordinary school in which the students get enough exposure. But these schools find a shortage of value education. Admittedly the competitive system of education in these ordinary schools is not willing to allocate any time for value education. Therefore the hidden truth behind the scenario which no one has seen is deprival of moral standards.

Selfishness, jealousy, envy and urge to outstrip others are some of the wicked feelings inculcate in them. Did you ever know even parents contribute in these unfortunate consequences knowingly or unknowingly? How can we expect children to be kind to others and have sympathetic joy on seeing others success and stand united while helping everyone equally and equitably.

Therefore it is reasonable to assume that the ordinary school is adequate in providing opportunities for the students to perform. Japan has become exemplary in introducing value based education. The primary standards engage only in activities which promote their moral standards in the school. They have received grading tests and competitions from the curriculum.

On this account we should humbly and respectfully remind our Maha Sangha that what we expect from a Dhamma school is a person with values and high moral standards. The failure of the ordinary school in this context have made the responsibility falls on the shoulder of the Dhamma school.