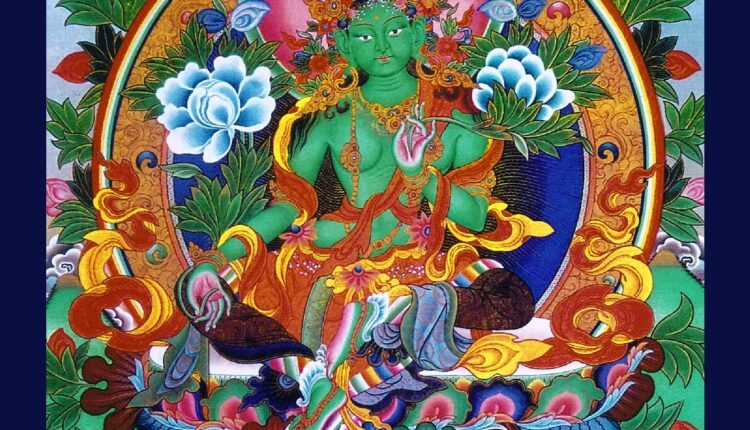 ‘Tārā Devi’ is not an unusual name for Sri Lankans. Tārā  statues can be seen in Sri Lankan museums. However, the majority does not have a clear understanding on who Tārā  is. ‘Satipatthāna’ team was able to penetrate a great deal of information that has not been heard or known before through a Tibetan Buddhist monk.

According to Tibetan ‘Vajrayāna’ Buddhism Tārā is female ‘Bodhisattvza’. Tārā statues known as ‘Grol ma’ is apparent half-nude. ‘Tārā Devi’ can be seen in twenty-one colours and models. Out of them white and green statues are supreme. It is believed that the blue version of Tārā known as ‘Ugra Tārā’ foster people to stand against injustice. She is very similar to goddess ‘Kāli’ mentioned in Hindu literature.

Tibetans believe that ‘Tārā Devi’ is the spouse of ‘Avalokitheshwara Bodhisattva’

and that she was born out of his tears. According to Tibet folk tales a tear that fell from

‘Awalokitheshwara Bodhisattva’ because of his vast kindness had turned into a massive tank. Tārā was born from a lotus flower which bloomed in that certain tank.

Tārā possesses all the qualities of ‘Awalokitheshwara Bodhisattva’.  Tibetans believe that Tārā inhabit in every adherent woman.

‘Bhodhisattva’ holds a high regard in the Mahayana concept. It is said that a ‘Bhodhisattva’ has immense kindness. Being compassionate towards others is one of their qualities. A ‘Bodhisattva’ cannot attain Nirvāna until every other being does so.

Since ‘Tārā Devi’ is the spouse of the ‘Bodhisattva’ she is a mother to every being on earth. (including the Buddha)

In ‘Vajrayāna’ Buddhism Tārā is known as the goddess that protects all devotees during pilgrimages. Also, throughout the journey to nirvana Tārā is like a bright star which guides devotees on the spiritual path. Since green colour is interconnected with the environment ‘Green Tārā represents the nature. Tārā which is mentioned in the Tibetan ‘Vajrayana’ Buddhism is a deep concept.

Green Tārā is given a special place in everyday spiritual and religious activities. Statues of Green Tārā  can be seen in houses and religious places. Green Tārā has a greenish skin complexion. She possesses a lotus flower in her left hand while her right hand appears in a signature pose. In accordance with her signature posed right hand, experts say that she’s liberal. Lotus flower in her left hand shows that she’s a light to our lives through pain and sorrow. Both her legs show her willingness to stand up and help her devotees. Some claim that, her bended leg represents her spiritual life while her straight leg represents her personal relations. Her pose represents both human and goddess nature of her. Her devotees believe that she is ready to help anyone at any time. They also believe that ‘T Devi’ would definitely help them just by

saying her name or reciting the ‘Tārā mantra’ at any hard time.

‘Tārā also holds an important place in the ‘Feng Shui.  Feng Shui is an eastern sastra altered influenced from by Buddhism and Hinduism.

According to Feng Shui, green colour is associated with wood. Wood is one of the five sections in Feng Shui. Wood is connected with flexibility, sympathy, and development.

Feng Shui teaches how to use forces in the environment in the correct way. Some believe that there is spiritual power in Green Tārā statue. Therefore, it is believed that keeping a Green Tārā statue at home is good and the energy that radiates from the statue helps us to live a good life. By keeping a statue or a framed picture of Green Tārā at a house or a workplace helps to radiate this energy. Keeping a Green Tārā statue or a picture in the bedroom helps to enhance unity, support and love within the family members. It is suitable to keep a ‘Tārā statue at the entrance of a house in a way that people can see it when entering the house.

Green Tārā devotees are mostly vegetarians. They do not worship her after consuming any kind of meat. Her devotees live a very spiritual and a religious life in order to get her blessings. White Tārā known as ‘Shwetha’ Tārā presented in a meditating pose. She is being seated on a lotus flower in order to manifest her purity.  According to Buddha, lotus flower is considered pure because of its ability to emerge from murky waters and be perfectly clean.

She possesses seven eyes. On the palm, on the feet and on her forehead. The eye on her forehead shows how observant she is. Eyes on her palms and her feet shows that she’s always concerned about her devotees. Her right hand shows her liberality. She also possesses a lotus flower in her hand.

Tibetans chant these mantras wishing speedy recovery and a long life for people who are sick.