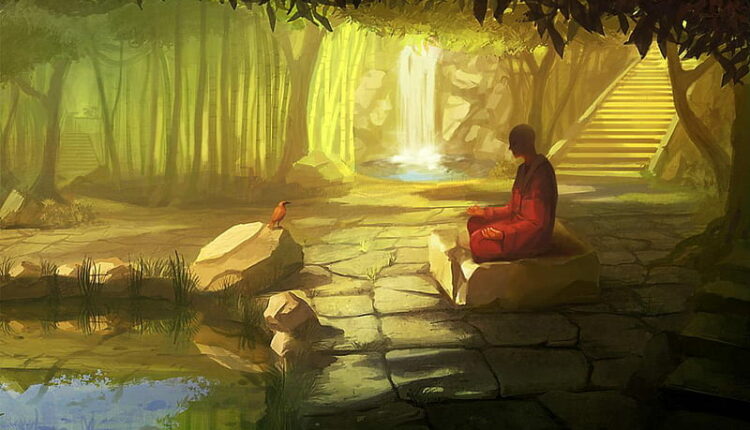 The Fourth Noble Truth is that of the Way leading to the Cessation of Dukkha (Dukkhanirodhagāminīpaṭipadā-ariyasacca). This is known as the ‘Middle Path’ (Majjhimā Paṭipadā), because it avoids two extremes: one extreme being the search for happiness through the pleasures of the senses, which is ‘low, common, unprofitable and the way of the ordinary people’; the other being the search for happiness through self-mortification in different forms of asceticism, which is ‘painful, unworthy and unprofitable’. Having himself first tried these two extremes, and having found them to be useless, the Buddha discovered through personal experience the Middle Path ‘which gives vision and knowledge, which leads to Calm, Insight, Enlightenment, Nirvāṇa’. This Middle Path is generally referred to as the Noble Eightfold Path (Ariya-Aṭṭhaṅgika-Magga), because it is composed of eight categories or divisions: namely,

Practically the whole teaching of the Buddha, to which he devoted himself during 45 years, deals in some way or other with this Path. He explained it in different ways in different words to different people, according to the stage of their development and their capacity to understand and follow him. But the essence of those many thousand discourses scattered in the Buddhist Scriptures is found in the Noble Eightfold Path.

It should not be thought that the eight categories or divisions of the Path should be followed and practised one after the other in the numerical order as given in the usual list above. But they are to be developed more or less simultaneously, as far as possible according to the capacity of each individual. They are all linked together and each helps the cultivation of the others.

These eight factors aim at promoting and perfecting the three essentials of Buddhist training and discipline: namely: (a) Ethical Conduct (Sīla), (b) Mental Discipline (Samādhi) and (c) Wisdom (Paññā).[116] It will therefore be more helpful for a coherent and better understanding of the eight divisions of the Path, if we group them and explain them according to these three heads.

Ethical Conduct (Sīla) is built on the vast conception of universal love and compassion for all living beings, on which the Buddha’s teaching is based. It is regrettable that many scholars forget this great ideal of the Buddha’s teaching, and indulge in only dry philosophical and metaphysical divagations when they talk and write about Buddhism. The Buddha gave his teaching ‘for the good of the many, for the happiness of the many, out of compassion for the world’ (bahujanahitāya bahujanasukhāya lokānukampāya).

According to Buddhism for a man to be perfect there are two qualities that he should develop equally: compassion (karuṇā) on one side, and wisdom (paññā) on the other. Here compassion represents love, charity, kindness, tolerance and such noble qualities on the emotional side, or qualities of the heart, while wisdom would stand for the intellectual side or the qualities of the mind. If one develops only the emotional neglecting the intellectual, one may become a good-hearted fool; while to develop only the intellectual side neglecting the emotional may turn one into a hard-hearted intellect without feeling for others. Therefore, to be perfect one has to develop both equally. That is the aim of the Buddhist way of life: in it wisdom and compassion are inseparably linked together, as we shall see later.

Now, in Ethical Conduct (Sīla), based on love and compassion, are included three factors of the Noble Eightfold Path: namely, Right Speech, Right Action and Right Livelihood. (Nos. 3, 4 and 5 in the list).

Right speech means abstention (1) from telling lies, (2) from backbiting and slander and talk that may bring about hatred, enmity, disunity and disharmony among individuals or groups of people, (3) from harsh, rude, impolite, malicious and abusive language, and (4) from idle, useless and foolish babble and gossip. When one abstains from these forms of wrong and harmful speech one naturally has to speak the truth, has to use words that are friendly and benevolent, pleasant and gentle, meaningful and useful. One should not speak carelessly: speech should be at the right time and place. If one cannot say something useful, one should keep ‘noble silence’.

Right Action aims at promoting moral, honourable and peaceful conduct. It admonishes us that we should abstain from destroying life, from stealing, from dishonest dealings, from illegitimate sexual intercourse, and that we should also help others to lead a peaceful and honourable life in the right way.

Right Livelihood means that one should abstain from making one’s living through a profession that brings harm to others, such as trading in arms and lethal weapons, intoxicating drinks, poisons, killing animals, cheating, etc., and should live by a profession which is honourable, blameless and innocent of harm to others. One can clearly see here that Buddhism is strongly opposed to any kind of war, when it lays down that trade in arms and lethal weapons is an evil and unjust means of livelihood.

These three factors (Right Speech, Right Action and Right Livelihood) of the Eightfold Path constitute Ethical Conduct. It should be realized that the Buddhist ethical and moral conduct aims at promoting a happy and harmonious life both for the individual and for society. This moral conduct is considered as the indispensable foundation for all higher spiritual attainments. No spiritual development is possible without this moral basis.

Next comes Mental Discipline, in which are included three other factors of the Eightfold Path: namely, Right Effort, Right Mindfulness (or Attentiveness) and Right Concentration. (Nos. 6, 7 and 8 in the list.)

The practice of concentration on breathing (ānāpānasati) is one of the well-known exercises, connected with the body, for mental development. There are several other ways of developing attentiveness in relation to the body – as modes of meditation.

With regard to sensations and feelings, one should be clearly aware of all forms of feelings and sensations, pleasant, unpleasant and neutral, of how they appear and disappear within oneself.

As regards ideas, thoughts, conceptions and things, one should know their nature, how they appear and disappear, how they are developed, how they are suppressed, and destroyed, and so on.

These four forms of mental culture or meditation are treated in detail in the Satipaṭṭhāna-sutta (Setting-up of Mindfulness).[117]

The third and last factor of Mental Discipline is Right Concentration leading to the four stages of Dhyāna, generally called trance or recueillement. In the first stage of Dhyāna, passionate desires and certain unwholesome thoughts like sensuous lust, ill-will, languor, worry, restlessness, and skeptical doubt are discarded, and feelings of joy and happiness are maintained, along with certain mental activities. In the second stage, all intellectual activities are suppressed, tranquillity and ‘one-pointedness’ of mind developed, and the feelings of joy and happiness are still retained. In the third stage, the feeling of joy, which is an active sensation, also disappears, while the disposition of happiness still remains in addition to mindful equanimity. In the fourth stage of Dhyāna, all sensations, even of happiness and unhappiness, of joy and sorrow, disappear, only pure equanimity and awareness remaining.

Thus the mind is trained and disciplined and developed through Right Effort, Right Mindfulness, and Right Concentration.

From this brief account of the Path, one may see that it is a way of life to be followed, practised and developed by each individual. It is self-discipline in body, word and mind, self-development and self-purification. It has nothing to do with belief, prayer, worship or ceremony. In that sense, it has nothing which may popularly be called ‘religious’. It is a Path leading to the realization of Ultimate Reality, to complete freedom, happiness and peace through moral, spiritual and intellectual perfection.

In Buddhist countries there are simple and beautiful customs and ceremonies on religious occasions. They have little to do with the real Path. But they have their value in satisfying certain religious emotions and the needs of those who are less advanced, and helping them gradually along the Path.

With regard to the Four Noble Truths we have four functions to perform:

The First Noble Truth is Dukkha, the nature of life, its suffering, its sorrows and joys, its imperfection and unsatisfactoriness, its impermanence and insubstantially. With regard to this, our function is to understand it as a fact, clearly and completely (pariññeyya).

The Second Noble Truth is the Origin of Dukka, which is desire, ‘thirst’, accompanied by all other passions, defilements and impurities. A mere understanding of this fact is not sufficient. Here our function is to discard it, to eliminate, to destroy and eradicate it (pahātabba).

The Third Noble Truth is the Cessation of Dukkha, Nirvāṇa, the Absolute Truth, the Ultimate Reality. Here our function is to realize it (sacchikātabba).

The Fourth Noble Truth is the Path leading to the realization of Nirvāṇa. A mere knowledge of the Path, however complete, will not do. In this case, our function is to follow it and keep to it (bhāvetabba).[119]

THE HOLY RELICS FLEW TO MONGOLIA