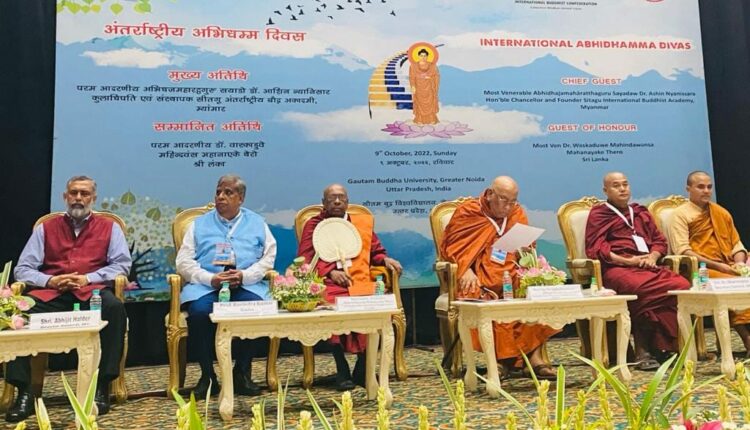 The  International Abhidhamma Divas held in the city of Noida, Uttar Pradesh  on October 09, 2022 – the full moon Poya Day ( Sharada Purnima ) – under the auspices of the International Buddhist Confederation (IBC), in collaboration with the Gautam Buddha University, to commemorate the day of  the Buddha’s descent, nearly two-and-half millennia back,  from the celestial domain of thirty-three divine beings to Sankassiya (UP), presently known as Sankisa Basantpur in UP,  turned out to be a historical milestone event in the annals of the Buddhist history highlighting the positively and progressively changing global outlook on the teachings of the Buddha. Deep, enlightening and highly spiritualizing discourses on the multifarious aspects of the Dhamma were delivered at the event attended by over 150 senior and scholarly Buddhist monks representing the Buddhist communities of Bhutan, Myanmar, India and Sri Lanka and also special invitees. The welcome address was delivered by Venerable Dr.Dammapiya , Secretary General of the IBC while the presentations were  by Venerable Metteyya Sakyaputta, Vice Chairman of the Lumbini Development Trust, Nepal, Ven.Bhikku Sanghasena Mahathera, Founder and Spiritual Director , Mahabodhi Meditation Centre, Leh-Ladakh,  Most Ven. Dr.Waskaduwe Mahindawansa Mahanayake Thero , Sri Sambudhu Sasanodaya Sangha Sabha, Sri Lanka , Shri Yogi Adinath, Chancellor, Gautham Buddha University (TBC) and  Most Ven. Abhidhajamaharatthaguru Dr.Ashin Nanissara (Sitagu Sayadaw), Chancellor, Sitagu International Buddhist Academics, Myanmar.  The Dhammasagani Matika Path by the Venerable Monks was also held and at the conclusion was held the launch of the book ‘Dhamma – Anushilalana (investigating the Buddhist Traditions) by Prof. Bimalendra Kumar and Ujjwal Kumar.  Panel discussion on ‘Significance of Abhidhamma’ also featured an important part of the event. The event to commemorate the most significant day in the life of the Buddha and humanity that has been carved in golden letters in the long history of Buddhism held in the picturesque modern city of Noida, appropriately named Gautam Buddha Nagar, located closer to the sacred venue where the Buddha descended has drawn delight and great appreciation from Buddhist communities across the world. And our deep gratitude has to be expressed to the legendary leader of India, Prime Minister Shri Narendra Modi and the Government of India under his leadership , especially the Indian Union Ministry of Culture for  fostering and promoting Buddhism ; for encouraging and supporting democratic and genuine international organizations working towards that lofty goal;  and for every support of great magnitude and expenditure that has been benevolently and generously extended over the decades and centuries . The Sri Lankan Maha Sangha gratefully remember Prime Minister Shri Narenra Modi’s special visit to Sri Lanka to be chief guest at the UN-declared Vesak Week in Colombo in May 2017 ; the declaration of  Kushinagar in Uttar Pradesh where the Buddha spent his last days and achieved Maha Parinirvana, as an international airport city on October 20, 2021, hosting a Sri Lanka Maha Sangha delegation of 100 senior monks and a government ministerial delegation; and his presence,  together with the Nepalese Prime Minister, Shri Sher Bahadur Deuba, to celebrate the Buddha Purnima Day in Lumbini and attending the “Shilanyas” ceremony for laying the foundation stone for the construction of the International Centre for Buddhist Culture and Heritage at a plot in Lumbini belonging to the International Buddhist Confederation (IBC) and his overly demonstrated commitment and involvement throughout his legendary political career towards Buddhist concepts , for their fostering and promotion and all support extended towards that cause ; the steps towards preserving and safeguarding all Buddhist shrines, places of worship and archaeological sites. The Prime Minister’s speeches at international forums, including in the UN General Assembly, are recorded in golden letters in pages of Buddhist history and following quotations on the Buddha and Buddhist principles are worth recalling:

“Harmony and peace were India’s message to the world, said the Prime Minister and added, “We are citizens of a country that has given message of peace, Buddha to the world and not wars,” he said underlining India’s credentials to speak with “seriousness” and “anger” on the issue of terrorism.

“India is a several thousand-years-old civilization and has historically believed in welfare for all, that is the crux of our slogan of Sabka Saath, Sabka Vikas and Sabka Vishwas,”

“Our country has never given ‘Youth’ (War) , it has given Buddha.”  He also told an audience of dignitaries at the inauguration of the Vesak Week in Colombo, he believed the Buddha message of peace to be the answer to the ‘growing violence the world over ‘.

Vesak is a day for humanity to revere the birth, the enlightenment and the Parinibbana of Lord Buddha, the Tathagatha.  A day to rejoice in Buddha. A day to reflect on the supreme truth and timeless relevance of Dhamma, and the four noble truths.

That is the message the legendary Indian leader Shri Narendra Modi conveyed to the world standing on the podium of the UN and other international organizations for world peace, harmony and welfare of mankind. So, we the Buddhist monks of the Maha Sangha who have renounced family, all kinds of possessions and ties to the material world and committed ourselves to the noble cause taught by the Buddha have even more heavier dedication on our shoulders to take forward the message of compassion, unconditional love, peace brotherhood to every corner of the current warring world, splintered by military superiority,  political ideologies, regionalism, communal and racial hatred ,  and fanatical religious outlooks . I am happy to say that today’ Abhidhamma Divas celebration is one more important step amidst the thousands of such events held over the millennia to take the message of the Buddha to the world. I am sure that the International Buddhist Confederation (IBC) in collaboration with all global stakeholders will continue its historically significant role in taking the message of the Buddha and other related activities.

I also wish to reiterate here what said in my speech at the Abhidhamma Divas Celebrations on India’s vital role on taking forward the teachings of the Buddha to the world nations: “India did not forget her responsibility in spreading and promoting Buddhism in neighboring countries and creating platform for the international Buddhist community to gather and exchange their experiences on a common platform”.

May the Blessings of the Noble Triple Gem be on the Indian leader Shri Narendra Modi, the hierarchy of the International Buddhist Confederation (IBC), Gautam Buddha University for organizing the commemoration on the Sharada Purnima Day, all stakeholders in this event, and everyone the world over, including peace-loving political leaders, for continued success in their lofty cause.

IS BIRTH CONTROL IN ACCORDANCE WITH BUDDHIST TEACHING?