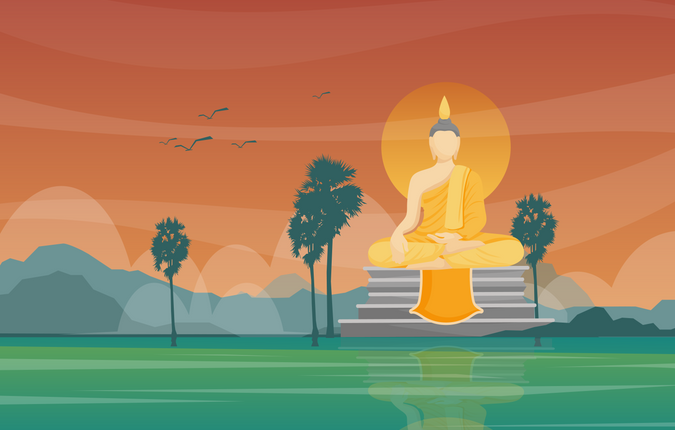 Herein someone avoids the taking of life and abstains from it. Without stick or sword, conscientious, full of sympathy, he is desirous of the welfare of all sentient beings.[28]

The “taking of life” that is to be avoided is intentionalkilling, the deliberate destruction of life of a being endowed with consciousness. The principle is grounded in the consideration that all beings love life and fear death, that all seek happiness and are averse to pain. The essential determinant of transgression is the volition to kill, issuing in an action that deprives a being of life. Suicide is also generally regarded as a violation, but not accidental killing as the intention to destroy life is absent. The abstinence may be taken to apply to two kinds of action, the primary and the secondary. The primary is the actual destruction of life; the secondary is deliberately harming or torturing another being without killing it.

While the Buddha’s statement on non-injury is quite simple and straightforward, later commentaries give a detailed analysis of the principle. A treatise from Thailand, written by an erudite Thai patriarch, collates a mass of earlier material into an especially thorough treatment, which we shall briefly summarize here.[29]The treatise points out that the taking of life may have varying degrees of moral weight entailing different consequences. The three primary variables governing moral weight are the object, the motive, and the effort. With regard to the object there is a difference in seriousness between killing a human being and killing an animal, the former being kammically heavier since man has a more highly developed moral sense and greater spiritual potential than animals. Among human beings, the degree of kammic weight depends on the qualities of the person killed and his relation to the killer; thus killing a person of superior spiritual qualities or a personal benefactor, such as a parent or a teacher, is an especially grave act.

The motive for killing also influences moral weight. Acts of killing can be driven by greed, hatred, or delusion. Of the three, killing motivated by hatred is the most serious, and the weight increases to the degree that the killing is premeditated. The force of effort involved also contributes, the unwholesome kamma being proportional to the force and the strength of the defilements.

The positive counterpart to abstaining from taking life, as the Buddha indicates, is the development of kindness and compassion for other beings. The disciple not only avoids destroying life; he dwells with a heart full of sympathy, desiring the welfare of all beings. The commitment to non-injury and concern for the welfare of others represent the practical application of the second path factor, right intention, in the form of good will and harmlessness.

He avoids taking what is not given and abstains from it; what another person possesses of goods and chattel in the village or in the wood, that he does not take away with thievish intent.

“Taking what is not given” means appropriating the rightful belongings of others with thievish intent. If one takes something that has no owner, such as unclaimed stones, wood, or even gems extracted from the earth, the act does not count as a violation even though these objects have not been given. But also implied as a transgression, though not expressly stated, is withholding from others what should rightfully be given to them.

Commentaries mention a number of ways in which “taking what is not given” can be committed. Some of the most common may be enumerated:

(1) stealing: taking the belongings of others secretly, as in housebreaking, pickpocketing, etc.;

(2) robbery: taking what belongs to others openly by force or threats;

(3) snatching: suddenly pulling away another’s possession before he has time to resist;

(4) fraudulence: gaining possession of another’s belongings by falsely claiming them as one’s own;

The degree of moral weight that attaches to the action is determined by three factors: the value of the object taken; the qualities of the victim of the theft; and the subjective state of the thief. Regarding the first, moral weight is directly proportional to the value of the object. Regarding the second, the weight varies according to the moral qualities of the deprived individual. Regarding the third, acts of theft may be motivated either by greed or hatred. While greed is the most common cause, hatred may also be responsible as when one person deprives another of his belongings not so much because he wants them for himself as because he wants to harm the latter. Between the two, acts motivated by hatred are kammically heavier than acts motivated by sheer greed.

The positive counterpart to abstaining from stealing is honesty, which implies respect for the belongings of others and for their right to use their belongings as they wish. Another related virtue is contentment, being satisfied with what one has without being inclined to increase one’s wealth by unscrupulous means. The most eminent opposite virtue is generosity, giving away one’s own wealth and possessions in order to benefit others.

The guiding purposes of this precept, from the ethical standpoint, are to protect marital relations from outside disruption and to promote trust and fidelity within the marital union. From the spiritual standpoint it helps curb the expansive tendency of sexual desire and thus is a step in the direction of renunciation, which reaches its consummation in the observance of celibacy (brahmacariya) binding on monks and nuns. But for laypeople the precept enjoins abstaining from sexual relations with an illicit partner. The primary transgression is entering into full sexual union, but all other sexual involvements of a less complete kind may be considered secondary infringements.

The main question raised by the precept concerns who is to count as an illicit partner. The Buddha’s statement defines the illicit partner from the perspective of the man, but later treatises elaborate the matter for both sexes.

Any case of forced, violent, or coercive sexual union constitutes a transgression. But in such a case the violation falls only on the offender, not on the one compelled to submit.

The positive virtue corresponding to the abstinence is, for laypeople, marital fidelity. Husband and wife should each be faithful and devoted to the other, content with the relationship, and should not risk a breakup to the union by seeking outside partners. The principle does not, however, confine sexual relations to the marital union. It is flexible enough to allow for variations depending on social convention. The essential purpose, as was said, is to prevent sexual relations which are hurtful to others. When mature independent people, though unmarried, enter into a sexual relationship through free consent, so long as no other person is intentionally harmed, no breach of the training factor is involved.

Ordained monks and nuns, including men and women who have undertaken the eight or ten precepts, are obliged to observe celibacy. They must abstain not only from sexual misconduct, but from all sexual involvements, at least during the period of their vows. The holy life at its highest aims at complete purity in thought, word, and deed, and this requires turning back the tide of sexual desire.