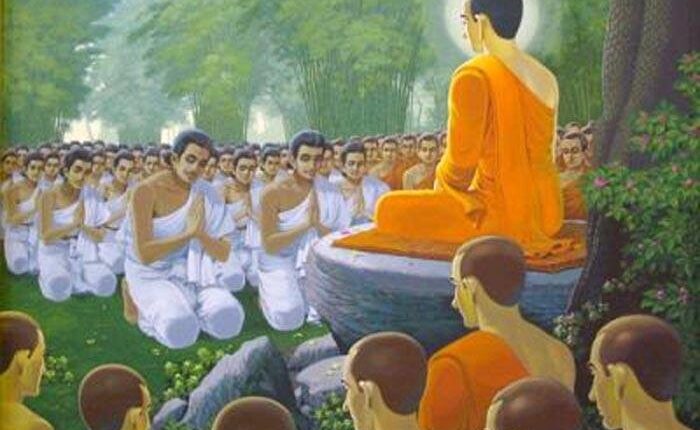 Particular importance can be seen in the education system during the Buddha’s time. Education was referred to as ‘Brahmachariyawasa’ in Brahman culture, since this education is lifetime, the same word was used to refer to the Buddhist monastic life.

When orating about the qualities of the Buddha, he was known as the teacher of the gods and the humans [‘Saththa devamanussanan’]. The fact that the ‘sangha’ counted him as their teacher [‘amhākaṅ sattā’] while the Buddha considered the ‘sangha’ as his disciples [‘mama sāvakā’]; demonstrates that the Buddhist entire monastic life is based on education. Furthermore, in the ‘parinibbāna sutta’ it is stated that all four sects should learn from their teacher; and should be able to teach others.

It is mentioned in the ‘Lakkhana Sutta’ [DN. III, p.254] that in his past lives the Buddha was an ideal teacher with effective experience. previously, when he was born in the human world, he taught his disciples with the intention, “May these students be adept in learning and following the skills or the science that I teach; may they not be exhausted” [pūbbe manūssa bhūto saccaccaṅ vāceta ahosi, sippaṅ va vijjaṅ va kinthime kippaṅ vijaneyyuṅ na ciraṅkilisseyuṅthi’].

During the Buddha’s time, words like ‘Sikka’ and ‘Brahmachariya’ were used to refer to education. It shows that they valued practicality. It does not matter how much you study if the things you study are not practically applicable, just like one is herding but make no use of the cows. Buddhists should not only be consisted of wisdom but also follow. Buddha’s life is a great example of that case[‘vijjācarana sampanno’]. Any religion or philosophy get populated through education and communication. Critics say that the Buddha’s time can be marked as special considering the organizational education pattern they had.

Ancient Egyptian and Indian education was based on teaching history, morality, astrology, and religion. Also, in ancient times education was limited to royals, elites, war heroes, and priests. After the evolution of the humane society, education was democratized. Credit for the democratizing of education goes to the Buddhists in India. With the spread of Buddhist monastic education, despite the caste system; education was accessible for lower-class people too.

During the time of Buddha, a scholarly monks’ chamber was a place for education. Accordingly, with the specialty of each monk, students went into their chambers and learned from them (they were known as pirivena). Every new monk had two teachers named ‘Achariya’ and ‘Upajjāya’.

The first five universities in the world (Nalanda, Wickramashila, Jagaddala, Odanthapuri, and valabhi) were initiated by Buddhists. In spite of the fact that the Brahmins held the monopoly over education in India, the Buddhists democratized it. Monastic education which was initiated in order to discipline the novice monks was later developed into ‘Pirivena’ and ‘Maha Vihara’.

In ‘parinibbāna sutta,’ the Buddha has mentioned that he will not attain ‘parinibbāna’ until all four sects learn his doctrine properly, master it, become loyal followers, able to teach others and defend the denaturation of his teachings the religion properly.

In Buddhism, there is the freedom to investigate and experiment. This kind of a perfect freedom

cannot be seen in any other religion. At the same time, Buddhism has not restricted Buddhists from learning other religions and philosophies. Since the time of the Buddha, Buddhists have

been good with other religions. It is mentioned in the ‘Pali Sutta Pitaka’ that the Buddha

too had the habit of visiting other religious monasteries and engaged in friendly conversations. Contemporary monks and laity too followed the same habit.

Buddhism hasn’t restricted the human right of its devotees to take decisions when it comes to religion.

A Buddhist’s search for the  truth consists of three steps. The first step is collecting knowledge from others, which is known as ‘Parathogosa’. The knowledge gained by this is called ‘Sūthamaya gṅāna’. The second step is by critically investigating the theory of causality and generate new  knowledge.

It is known as ‘Yoniso Manasikaraya’. The logical investigation is used there. Knowledge acquired by using logical investigation is known as ‘cinthāmaya gṅāna’. Thereafter, the third step is generating self-wisdom [sayaṅ abhiṅṅā saccikathwā] or ‘bhāvanāmaya gṅāna’ [meditational knowledge]. This proves how important is education in attaining ‘Nibbāna’.

It is clear how much education should be critical when referring to  ‘Kalama Sutta’. There the Buddha mentions how people hypercritically accept things and also how people accept certain information or teachings because they came from their teacher. The best way to accept things is to understand through self-wisdom. The purpose of Buddhist education is not to make students slaves of their teachers, it is to make students do their own critical investigation [paccattaṅ veditabbo’].

In the ‘Sangiithi Sutta’ it is mentioned that the Buddha had three skills. They were, ‘Āya’, ‘Apāya’ and ‘Ūpaya’. Out of these three ‘Ūpaya’ is educationally important. It is the ability to understand the mentality of the students and change the teaching strategies accordingly. In Mahayana it is interpreted as the aforementioned process is similar to a doctor diagnosing the sickness of a patient and prescribing medicines. Prince ‘Nanda’ was educated using a visual aid, “Rahula Thero’ was educated using a model and ‘Kisagotami’ was educated through a given special activity.