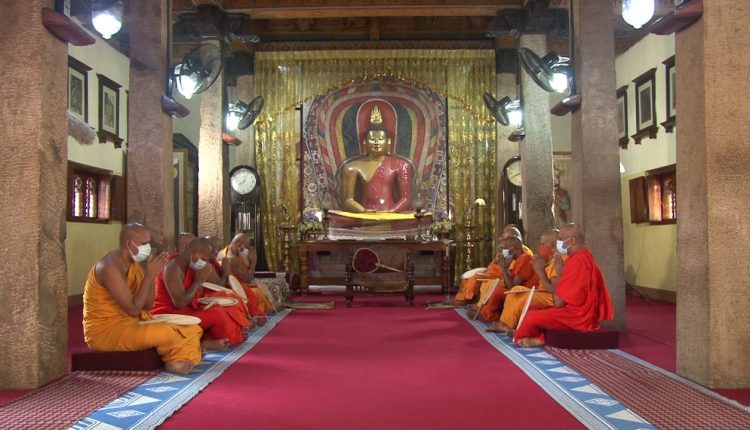 Buddha Purnima 2021 to commemorate the birth, the enlightenment and the mahaparinirvana of the Buddha was organised by New Delhi based International Buddhist Confederation and the Ministry of Culture India along with the Bodhagaya Management Trust, Asian Buddhist Conference for Peace, International Buddhist Council (Bodhagaya) and the Buddhist Brotherhood (Sri Lanka) on 26th May 2021 with livestreamings from Bodhagaya , Lumbini and Malwathu Maha Viharaya Kandy and New Delhi.

The global audiences were delighted to witness the live chanting of sacred Tri Sutta at the ancient Chapter House of Malwathu Maha Viharaya which has 270 year history where the first ordination in Sri Lanka took place right after Sri Lanka received formal ordination from Thailand under Most Venerable Weliwita Sri Saranankara Sangharaja Maha Thero. The sutta was chanted for the wellbeing of whole mankind throughout the world who are threatened by Corona pandemic.

This was chanted under the auspices of the Supreme Prelate of the Malwatte Chapter Most Ven Thibbatuwawe Sri Sumangala Thero, lead by Most Ven. Dimbulkumbure Wimaladharma Anunayake thero along with the participation of ten senior members of the Maha Sangha.

It was livestreamed globally and 39 countries virtually joined this international chanting.

Along with many other venerable leaders of Maha Sangha representing the globe, the Prime Ministers India Shri Narendra Modi and the Prime Minister of Sri Lanka Hon Mahinda Rajapaksa addressed the Buddhist world in the inagural session

A DROP OF DHAMMA FOR BURNING SOULS