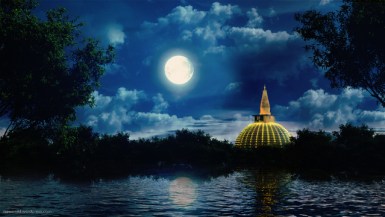 Hundreds and thousands of lives come to light all over the world in every moment, every passing minute. Even though the mankind expands every minute, the land we live in does not, the Earth does not expand like the human population.

To adjust to this rapid growth of population all over the world, the environment pays a huge price by sacrificing the precious forests and lands that belong to the nature, to make space for us humans. This act not only led to deforestation but has caused massive changes in the climate as well.

The month of August also known as “Nikini” was the second month of the summer season during the Buddha’s time. Since there were no heavy rain during the months of Vesak (May) and Poson (June), the Esala (July) and Nikini (August) months were the rainy months, and the soil becomes soft with heavy rains, preparing the soil for agriculture for the months starting from Binara (September). Once again due to the negligence of humans and because humans did not nurture the environment, the month of rain ‘Kini’, later became the month without rain, hence the name ‘Nikini’ came. Rivers often used to dry up during this month so the people near tank areas renovated them and some used to dry fish.

During the Buddha’s time, the Buddhist monks depended on ‘Pindapatha’, but this was troublesome to the people during the rainy season. As it is a basic teaching in Buddhism to live a life without hassle to others, the Buddha advised the monks to retain inside the temples and refrain from visiting homes to teach the Dhamma. Accordingly, the custom of offering a resident Buddhist monk with the Chivara (clothing- robe) began. It started ceremoniously mostly on the day of Esala Poya and for the monks who could not attend this on Esala Poya day, people started Chivara Pindapatha on the day of Nikini Poya. The monks who could not commence their Rain Retreat (Vas or Vassa) on the July (Esala) full moon was allowed to start the retreat on August (Nikini) full moon. Therefore, the Nikini Poya day was also named ‘Pasu Vas Sitina Poya’.

The Buddhist devotees are engaged in meritorious deeds during all twelve poya (full moon) days of the calendar, likewise today too many temples in the island organize religious activities to bless the sentient and celestial beings under health regulations in spite of a nationwide lockdown.

May this Nikini Poya be a day commemorating the great compassion of the Buddha, while living with a righteous attitude, righteous thinking and spreading kindness, compassion, equality, and coexistence for all beings of the universe.

May you all enjoy, good health and happinness! May you all be free from suffering!